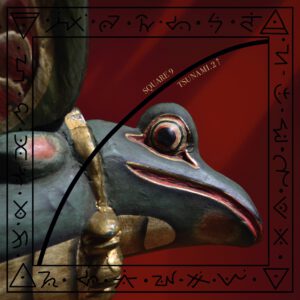 Recorded live on Sept. 22, 1991 and originally released by visionary operator Nick Schultz on Majora Records, Tsunami .2↑ was, still is, and will remain a mysterious album. Because the music didn’t represent or sound like either of the bands involved, they decided to call the group Square 9 and chose to leave everybody’s names off of it. No further information was given, only “Recorded at Grand Theater, Buenos Aires, Argentina”. Until today, nobody knows exactly who was behind the record. Rumors came up that is was part of the Sun City Girls legacy, but the “truth” lingered in the dark.

30 years after the recordings were made, a remastered version of the album is made available through Unrock. While the original release was two side-long tracks, the remastered version is split into 6 separate tracks, remixed and mastered by W. David Oliphant. Vinyl cut by Peter Koerfer at Ivory Tower. The album will be released in an edition of 400 copies.